It has arrived… that point in parenthood you never thought you’d reach… you find yourself wondering:

Is it time to get a minivan?

I’m going to preface this by stating that I wanted a minivan before I even had kids, so I’m definitely not a converted hater or anything. I do have a friend that has a sticker on the back of her car that says “I will never drive a minivan”. That car is, in fact, a minivan. And I may or may not laugh every time I see it. If you’d like to be likewise sarcastic, you can find tons of similar stickers on Etsy!

If you have more than one kid (and especially if you’re about to welcome number 3), you’ve probably found yourself facing the big decision: to mom-van or not to mom-van. I’m personally firmly on team mom-van, and here’s why:

First of all, you can open your doors with a button while you’re walking up to the car. Maaaaagic. Also, do you want to guess who is the absolute worst at opening car doors without ramming them into other cars? Kids. So when people inevitably park over the line with barely enough room for you to shimmy through, there won’t be any damage. Though, if they park like that maybe they deserve it. That’s an argument for another day. Moral of the story: sliding doors rock.

There. Are. Vans. With. Built-In. Vacuum. Cleaners. I’m not even sure I need to say more. But if you’ve ever seen the horror scene that is under a toddler car seat, you know why this is important. Also goldfish.

3) Rear AC vents in the ceiling.

This one is particularly important because Houston is a million and five degrees during the summer. When there are only vents in the front, it’s hard to get air to little ones in the back, especially when they’re rear-facing. Problem solved and no noggle needed (though they are pretty cool – pun intended).

Kids require a lot of stuff. So much stuff. ALL the stuff. Minivans have plenty of space to haul all of it and still be able to bring your groceries home. Also, in case you’re wondering, the Kroger ClickList people are really good about not openly judging the condition of your mom-van as they’re loading your groceries (don’t ask me how I know).

5) You can fit 3+ car seats safely without an advanced engineering degree.

Two car seats can usually be installed in most vehicles without too much concern, but 3 starts pushing limits. If your car has no third row, you have to fit 3 seats across, which isn’t easy to accomplish with all the guidelines on proper install and overlap of seats. If you do have a third row, you probably can’t reach it because there are car seats installed in the middle row and you can’t get the seat down. A minivan has two captains chairs to install seats in so someone, or a few someones, can still get in the back (fun fact: if you have two rear-facing seats in the middle row, the Honda Odyssey has the ability to move a captains chair to the middle so someone can easily get into the back seat). Please join the group Car Seats for the Littles on Facebook for advice on how to best install your necessary seats in the vehicle you own (please read the guidelines before posting – they’re strict because it’s such a large group and such a serious topic). We all want safe tiny humans!

There you go, lovely people. 5 reasons why mom-vans are the greatest and you can stop feeling guilty about wanting to drive one.

Bonus reason, from my we-are-NEVER-owning-a-minivan husband: leg room for the driver. He’s 6’7” and drives a Mazda3, for comparison’s sake. Though any time something goes wrong with the van I tell him it’s because it knows he’s not a mom. Ha!

What say you? Are you team mom-van or team please-let-me-be-able-to-make-an-SUV-work? Let us know in the comments! 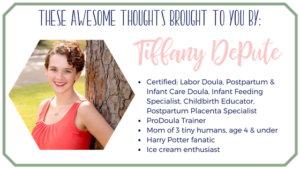